A tax on sugary drinks is on the way-do you welcome it?

Update: The Irish Government is introducing a tax at a rate of 30 cent per litre on drinks with over 8 grams of sugar per 100 millilitres.

According to a newly published document on the Programme for Govenrment, a new tax on sugary drinks is now on the way in Ireland. Among a number of measures in the programme, it mentions the introduction of a health levy on sugar-sweetened drinks. The tax had been argued for by The Irish Heart Foundation and Former Health Minister Leo Varadker but was ignored in the most recent budget by Michael Noonan.

According to a poll by IPSOS/MRBI in 2014, 52% of the public were in favour of a sugar tax, compared to 46% against. 87% of people polled believed  sugar-sweetened drinks contribute to obesity among young people.

The Food and Drinks Industry Ireland lobby group is against the levy, saying the move will merely serve to put consumers out of pocket. They said they would prefer the government to work with the food industry to make foods healthier.

Following in the footsteps of the UK

In the UK, a similar levy should come into effect in April 2018 and force up the price of drinks such as Coca Cola, Red Bull, and Lucozade to name a few. Supporters of the levy are welcoming the tax which could go a long way to fighting childhood obesity and cut the £5bn the NHS spend annually on related diseases. The proceeds of the levy would also help fund sports programmes in schools.

The graph below shows the volume of purchases (in litres per capita) by the top 20 countries with the highest  consumption of soft drinks. 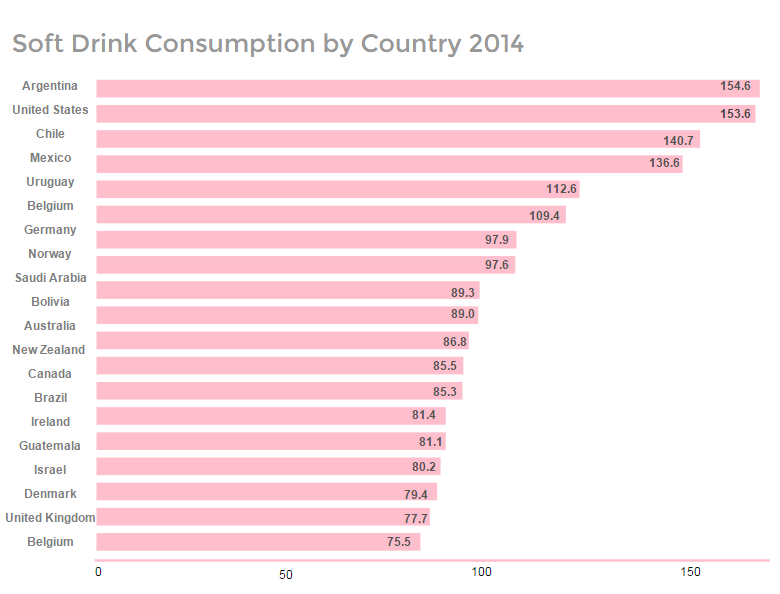 With an increasing obesity crisis worldwide, governments are looking at ways to reduce the consumption of products with high volumes of added sugar including a tax on soft drinks.

Once the tax is introduced, manufacturers can decide whether to reduce the amount of added sugar, absorb the cost, or pass it onto consumers. So for example, a can of Coke costing about 70p could have 8p added to the price when this tax is introduced.

The tax has both its supporters and opposition!

When Finance Minister George Osborne announced the sugar levy, he said its aim is to cut down on childhood obesity. The links between sugar and obesity have been investigated and confirmed by numerous reports. A report by the UK Government’s advisory group, Public Health England (PHE), made a number of recommendations including the removal of high amounts of added sugar in everyday food products.

To quote the intro, ‘’we are eating too much sugar and it is bad for our health. Consuming too many foods and drinks high in sugar can lead to weight gain and related health problems, as well as tooth decay. Almost 25% of adults, 10% of 4 to 5 year olds and 19% of 10 to 11 year olds in England are obese, with significant numbers also being overweight.’’

The report advocated a minimum price increase of 10-20% on high sugar products through a tax or levy on soft drinks.

Celebrity chef, Jamie Oliver, had been advocating a sugar tax to the government for a while and called the levy "A profound move that will ripple around the world...business cannot come between our Kids health!! Our kids’ health comes first’’.

The tax does have its opposition. Ian Wright, Director General of the Food and Drink Federation, says, ‘’the imposition of this tax will, sadly, result in less innovation and product reformulation, and for some manufacturers is certain to cost jobs. Nor will it make a difference to obesity.” source.

Some soft drinks companies are even considering legal action against the government over the controversial tax.

Others have noted that the tax will likely hit those on lower incomes the worst. This could also lead to a rise in illegal sales of soft drinks.

Others say companies will bulk up on artificial sweeteners to replace sugar and say the long-term health effects of some of these sweeteners are still unknown.

The move may also negatively impact SMEs, hindering innovation while also making it difficult to compete with larger brands on price.

Other countries where similar tax levies have been implemented include Mexico, France, Denmark and Hungary.

In the US, the American Beverage Association has spent millions lobbying Congress to fight the creation of a soft drinks tax. Currently, Berkeley California is the only city in the US with a soda tax, introduced in 2014 with mixed success.

According to Mexico's National Institute of Public Health, sales of soft drinks fell as much as 12% after the tax was introduced in 2014. However the soft drinks industry disputes these findings and argues that sugary drinks are only responsible for 5.6% of the average Mexican’s caloric intake. The reports have yet to show evidence of whether or not the tax has made an improvement on general public health.

Elsewhere, the sugar tax has been even been abolished. Denmark halved the tax on soft drinks in 2014 when it was estimated they were losing about €38.9m in VAT from illegal soft drink sales.

Finland announced it would scrap a tax on sweets and ice-cream as the European Commission found that the tax gave an unfair advantage to producers within the country as they would avoid additional import duties. There has also been a tax on soft drinks since 1940, which will remain in place, however the scope of the drinks subject to the tax will be reviewed.

South Africa's Prime Minister, Pravin Gordhan, announced the introduction of a sugar tax that will come into effect from 1 April 2017 in his budget speech.

Previously, doctors in Ireland called on the government to enforce a 20% rise in the price of sugary drinks but suggestions to this effect by the Minister for Health were rejected by the Finance Minister in the latest budget.

A report by The European Commission found that taxes on items such as sugar, salt or fat do result in lower consumption but they may also just encourage people to buy cheaper products. This could also lead to people buying cheaper knock-offs or even the growth of the black market on soft drinks.

Will this spread elsewhere?

Other countries such as India, The Philippines and Indonesia have started their own discussions and studies on the issue. Perhaps the UK model will pave the way for other governments to implement a new sugary tax to tackle issues such as obesity and tooth decay but it remains to be seen.

George Osbourne’s budget has proven unpopular in many quarters and the drinks industry is vowing to fight the implementation of a sugar tax on its products.

Let us know your thoughts on a sugar tax, would you welcome one in your home country?