Taxback.com is delighted to announce that Allan Dixon from Co. Wicklow, Ireland has won the role of Outback Adventurer in Tourism Australia’s 'Best Jobs in the World' competition. 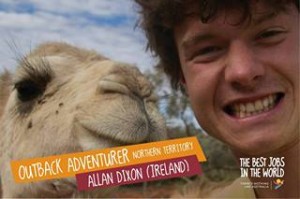 Allan, a DCU graduate, beat out 600,000 other applicants to win the job, launching a massive media campaign via Facebook, Twitter and his own personal website to help his chances. The media campaign garnered attention from Irish Politicians, musicians the world over and even master adventurer Bear Grylls, who wished Allan luck in the competition.

Last week, Allan and the two other finalists for the role of Outback Adventurer flew off to Australia to prove they’re tough enough for the job. As part of the unconventional ‘job interview’, Allan documented the entire experience by posting updates about his adventures (and mis-adventures) via his social media profiles, including amazing photos of various Aussie sights which includes a hilarious photo of him and, as he calls her, his ‘new girlfriend’ – a camel. All Allan’s efforts have paid off as last week he was chosen as the winner. Allan will now be paid €79,000 (AUS$100,000) to explore the outback and find the best and most breathtaking trails to bring tourists on.

When informed he had won, Allan said, ‘words can’t describe how amazing this whole experience has been’, with this father adding the he was ‘over the moon’ for his son.

The winners of the other jobs are Frenchwoman Elisa Detrez , who won the job of Park Ranger, Canadian Greg Snell who won the job of Wildlife Caretaker, Brazillian Roberto Seba who will be taking up the role of Lifestyle photographer, Britishman Rich Keam who is now the Taste Master and American Andrew Smith who will be Chief Funster.

Managing director for Tourism Australia, Andrew Mc Evoy said he was astounded by the enthusiasm and hard work the finalists put into the competition, saying ‘They have had so much fun over the past week… The successful candidates each demonstrated incredible talent, energy and desire throughout the application process and will, I’m sure, take these positive attributes into the job with them.

We wish Allan all the best in his new role and can’t wait to hear updates about all his adventures.